December 3 2020, Sydney – The Business Renewable Centre Australia’s annual State of the Market report has found 2020 will be a record year for Corporate Renewable Power Purchase Agreements (Corporate PPAs) in Australia, with governments and businesses investing $2.4B and buying over 1,000 megawatts (MW) of renewable energy.

“Amidst the turbulence of Covid-19, it’s been a record year for Corporate PPAs which is an incredible result. Along with the biggest Australian wind and solar PPAs signed by Queensland’s new public retailer CleanCo, corporate buyers and councils have kept renewable energy growing through Covid-19,” said Dr Chris Briggs, Technical Director of the BRC-A.

Darren Miller, ARENA, CEO, noted the growth and diversity of PPA buyers was testimony to the resilience of the Corporate PPA market in Australia.

“The development of the Corporate PPA market since 2016 has been extraordinary. In the past year, we have seen a growing range of organisations making deals from big corporates such as Aldi, Amazon and Shell through to smaller councils such as Hawkesbury City Council which is the sign of a healthy market. Corporate PPAs are now an established part of the market for renewable energy and playing an important role in clean energy transition,” said Mr Miller.

State of the Market also observed the leading role of governments in growing Corporate PPAs as retailer demand for renewable energy had fallen following the achievement of the national Renewable Energy Target.

“The return of government to the electricity market is not a return to centralised planning, but instead the development of new approaches to facilitating Corporate PPAs – either as a retailer like CleanCo in Queensland which is on-selling to corporates, aggregating buying groups like the City of Melbourne or an ‘anchor buyer’ like the Victorian Government’s proposal to join industrial buyers to the PPA they will be negotiating for their own usage. NSW will also be driving demand through auctions under the Electricity Infrastructure Strategy and Renewable Energy Zones,” said Dr Briggs.

“State Governments and councils are playing a leadership role in the growth of Corporate PPAs.”

Some of the other findings in the State of the Market Report included: 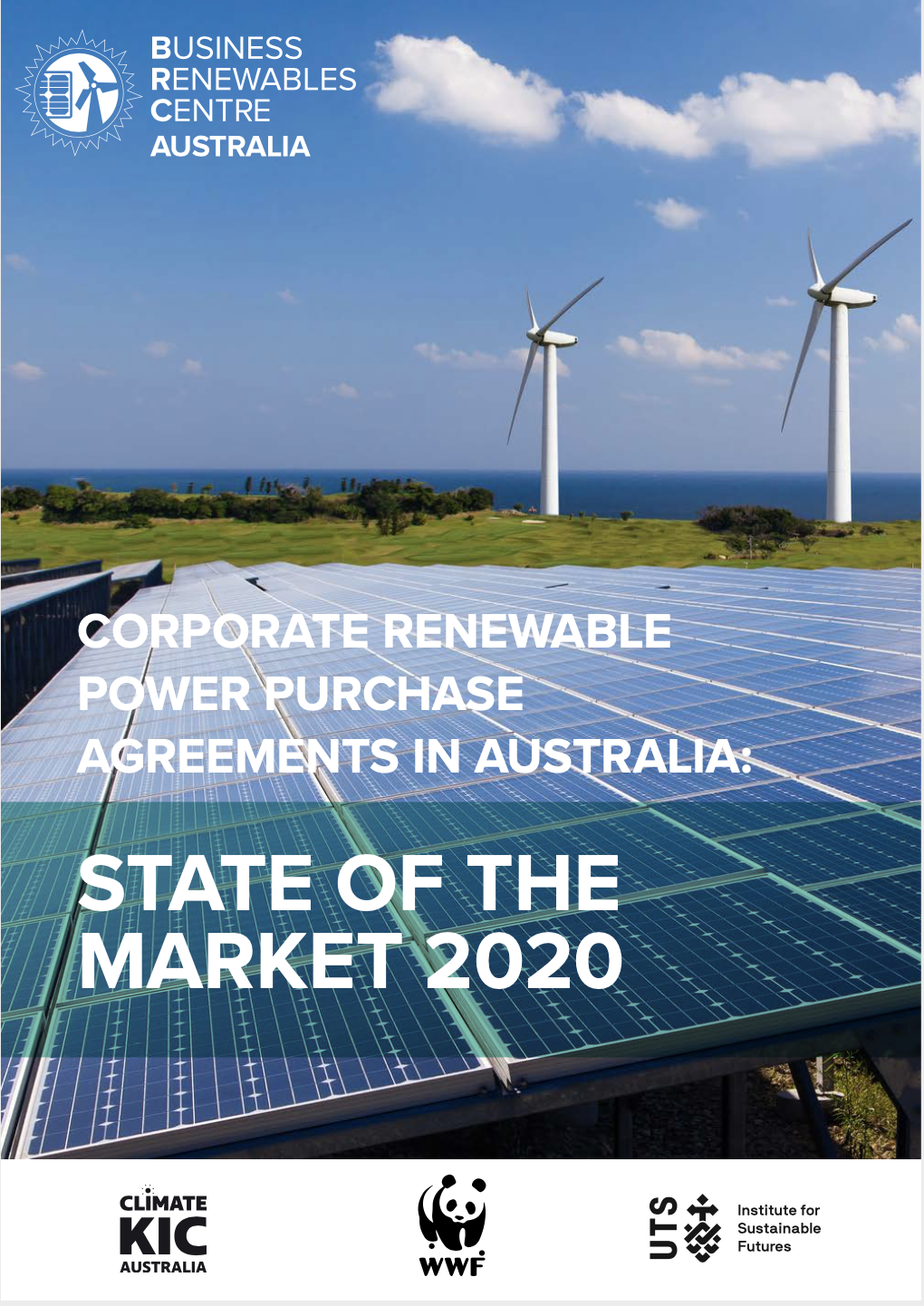 “Corporate PPAs are now an established part of the market for renewable energy and playing an important role in clean energy transition.”

The Business Renewables Centre Australia is the leading source of independent advice and information on Corporate Renewable PPAs. BRC-A is supported through funding by ARENA, the NSW, Victorian and Queensland Governments.

Seventy leading Australian organisations have made the switch to renewable energy in the past two years and procured nearly 2.3 GW of electricity – enough to power about 1.3 million

13 December 2021, Sydney – 2021 was a challenging year on many levels, but Corporate Purchasing of Renewables continues to be key feature of the energy market. The Business Renewable

In the world of climate innovation, the Business Renewables Centre Australia (BRC-A) is not a textbook venture. Rather, it is an unprecedented organisational collaboration, allowing market competitors to access high-value

The appetite for PPAs in light of COVID19

It is by no means controversial to suggest that corporate buyers can benefit from entering into a renewable Power Purchase Agreement. Jon Dee (RE100), a frequent collaborating partner with the

This article was originally published in ecogeneration. To read the original, please click here. All of the bumps and hiccups that accompany the integration of large amounts of renewable energy