13 December 2021, Sydney – 2021 was a challenging year on many levels, but Corporate Purchasing of Renewables continues to be key feature of the energy market. The Business Renewable Centre Australia’s annual State of the Market report has found that after a record year in 2020 where 1.3 GW of capacity were signed through Corporate PPAs in 2021 deals for 770 MW have been signed in the period to end October 2021 amidst the on-going COVID impacts and low wholesale electricity prices.

The emergence and growth of Corporate Renewable Power Purchase Agreements (Corporate PPAs) has been one of the major changes to the market for large-scale renewable energy. Since 2017, BRCA estimate there have been at least 110 Corporate PPAs negotiated, contracting over 4 GW of renewable energy generation.

In its annual survey of market participants, the BRCA has gained key insight into the current state of the PPA market in Australia. Dr Chris Briggs lead author and Technical Director of the BRCA noted, that: “In the context of low wholesale electricity prices and an industry slowdown, industry was positive about Renewable Energy Zones having a positive impact on Corporate PPAs. There have been questions as to whether the REZs might ‘crowd out’ corporate PPAs (as projects sign up for a strike price with government and/or PPAs with retailers returning to the market). However, around 60% of developers and 70% of service providers expect the REZs to increase corporate PPAs.”

The report also found that one of the key factors underpinning the resilience of the Corporate PPA market is the emergence of sustainability buyers as the key market cohort. Whilst the loss of demand amongst some buyers due to flat wholesale electricity prices has been observed, almost two-thirds of buyers in the BRC-A survey for two years running nominated non-price drivers for their interest in PPAs.

In a difficult environment, it’s a terrific result which highlights the on-going importance of Corporate PPAs in Australia’s energy transition.  What the State of the Market report also shows is the resilience of Corporate PPAs – there is demand from large and smaller buyers and retailers are developing products and offers to grow the market.  We can expect Corporate PPAs to continue to drive demand for renewable energy”, said Mr Miller.

Some of the other findings in the State of the Market Report included:

The Business Renewables Centre Australia is the leading source of independent advice and information on Corporate Renewable PPAs. It is convened by Climate-KIC Australia, Institute for Sustainable Futures (UTS) and WWF Australia. BRC-A is supported through funding by ARENA, the NSW, Victorian and Queensland Governments. 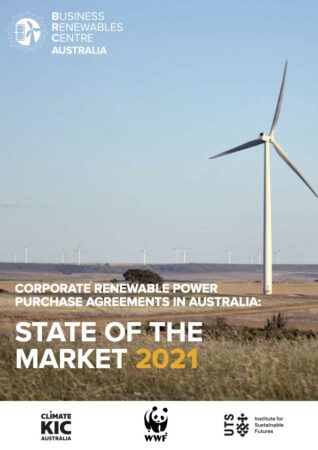 This article was originally published in ecogeneration. To read the original, please click here. All of the bumps and hiccups that accompany the integration of large amounts of renewable energy

It is by no means controversial to suggest that corporate buyers can benefit from entering into a renewable Power Purchase Agreement. Jon Dee (RE100), a frequent collaborating partner with the

The appetite for PPAs in light of COVID19

2020 will be a record year for Corporate Renewable Power Purchase Agreements (Corporate PPAs) in Australia, with governments and businesses investing $2.4B and buying over 1,000 megawatts (MW) of renewable energy

Seventy leading Australian organisations have made the switch to renewable energy in the past two years and procured nearly 2.3 GW of electricity – enough to power about 1.3 million

In the world of climate innovation, the Business Renewables Centre Australia (BRC-A) is not a textbook venture. Rather, it is an unprecedented organisational collaboration, allowing market competitors to access high-value